You've been Inspired to play an instrument we can help.

I've always wanted to play an instrument but didn't think I could...You Can

If you've been inspired to take action support by making a donation today. 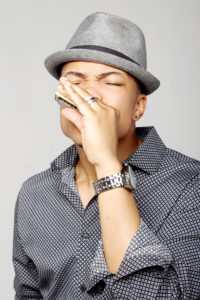 Damion ‘Yella P.’ Pearson is a native of Memphis, Tennessee. He’s a multitalented musician who blends Hip Hop and Delta Blues together into his own funky sound.

He grew up with four brothers, including a twin brother. The twins shared the same initials ‘D.P.’. When the twins got older they played together in the band Fiktivekin. The band members knew them by their initials D.P. Although they were often confused with each other, Damion had a lighter yellow shade of skin compared to his brother ,and he was soon called the ‘Yella’ twin. Later this was shortened to ‘Yella P’.

In school, Damion’s mother gave the brothers money for lunch or bus fare, but not both. At age thirteen Damion wanted a harmonica. He decided for one month he would walk home from school and go hungry at lunch so he could save the money and buy his first harmonica. He learned the Blues, because he grew up with the Blues. He pushed himself to learn, and continue to hone his talent with the harmonica and guitar. He also plays saxophone, trombone and piano.

He got his start playing on Beale Street with ‘Big’ Jerry Parnell. He’s been a practicing musician for 17+ years and he considers himself among the last of the ‘real’ Bluesmen. He’s one of the first Bluesmen to grow up in the Hip Hop era, listening to the sound along with Blues, Soul and Gospel. This musical diversity is buried in his soul and pours out in his unique funky sound.

He’s known for his passionate performances in the community at church and cultural events, and at Blues and Jazz venues. His soulful Blues harmonica style has been compared to artists like Stevie Wonder, Bobby Rush and Little Walter.